How To Handle And Win Any Argument. 9 Best Tips And Tricks.

Having an argument can be one of life’s most difficult emotional situations. Conflicts can arise - whether with someone you love, despise, or don’t even know. Heated debates increase anxiety, blood pressure, and your overall sense of discomfort! Some people go to great lengths to avoid any kind of conflict, while others seem ready to argue at a moment’s notice. If you’re like most people and you’re somewhere in between, you prefer not to argue - but you’re prepared to do so – if necessary! Now, the question is: How can you actually win an argument?! Here are some tips and tricks.

"That’s the beauty of argument, if you argue correctly, you’re never wrong."Christopher Buckley 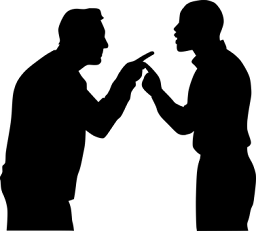 1 – Keep Your Voice Down

An argument is won by the person with the most compelling argument, NOT with the loudest voice! When debating, as hard as it may be, never raise your voice. It’s important that you remain calm, because the louder you talk, the louder your opponent talks – and the end result is just a yelling match!

2 - Get Your Opponent On Your Side

It’s a good idea to get your opponent on your side. You can do this by making statements that you know they agree with. And, you don’t even need to use a fact relating to your debate! As soon as your opponent agrees, you have won a psychological battle. You are no longer the opponent – you are a comrade.

4 – Appear To Be Open-Minded

Becoming defensive is one of the worst ways to win an argument. Don’t let your opponent sense that you’re digging into your position without being willing to consider alternatives. If you appear to be giving the other side’s position a thoughtful review, then the solution you propose will seem far more sensible. Additionally, your opponent may come to your side, without you having to do anything other than listening. By letting your opponent speak, the situation may resolve itself naturally.

5 - Stick To The Subject

When someone loses an argument, it’s common to see them try to divert the topic to something else – hoping you won’t notice their weakness. When this happens, don’t fall for it! Return to the original topic immediately. Give none time to other topics, until you have resolved the one that started the debate in the first place!

When your opponent states what they believe to be a fact, probe deeper into the fact with questions that expose its flaws. Use “tell me more” type questions, such as “can you give me an example?” These questions will almost always lead your opponent to the truth - and if they are honest, they will concede.

Another great way to win an argument is by not arguing at all! After making a strong argument, let your opponent do all the talking. Especially if they lack the facts to oppose you! They will likely just fumble around and give you a variety of new ways by which to oppose them. This may not lead to them conceding defeat, but it may lead to them walking away from the debate – a clear victory for you.

Do not say that something is “true”- unless you’re sure it is. Also, be prepared to prove it. It’s annoying to debate a topic with a person who is making up their arguments on the fly. You wouldn’t like it if people did that to you – so don’t do it to others. Only engage in a debate that you know you can win based on actual facts.

If you have all the facts to back you up, you should be able to win any argument - if your opponent will be honest. However, there will be times when your opponent gets the better of you, and they corner you. When this happens, just concede the win, and you should always be graceful in defeat. Nothing is worse than a person who argues for the sake and refuses to give in.

Let’s face it, debating is a part of life. From negotiating difficult deals at work to dealing with heated emotional conflicts at home. I hope now you have some useful tactics that will give you the upper hand, and help you win an argument. Also, I would suggest you debate with class and keep your relationship with the opponent a top priority. But apart from that, do what it takes to win! And you just can't argue with that. Can you? 😉 Let me know what you think!